Plots are one of the most important tools for working with measured data, and ProSEM scripting has capability to draw a large variety of plots with great flexibility. This page gives examples of different plotting capabilities.  It's not possible to create a generic plot script, because there are so many different types of measurement data, and so many different plot types, but it many cases, it's easy to modify a script to produce the desired plot results quickly and easily.

ProSEM includes the MATPLOTLIB plotting library, one of the most popular and powerful plotting packages for Python.  In addition to the main project website, there are hundreds of other websites and tutorials available online.

There are demonstration projects included with ProSEM, each of which draws a plot, one a line plot and one a histogram, one to the screen, the other to a file to be included as part of a report.  Since these are complete projects, they can give you an instant example of the possibilities. It is important to note, however, that these included demonstration projects are structured differently than user scripts, because they don't operate on the current project, but rather on a saved project included with ProSEM, so adapting the entire demonstration script is to user projects requires quite a bit of editing.  Therefore, it is recommended they be used to see the techniques, but not necessarily as a starting project for user scripts.  The scripts from this page should make better starting scripts for user projects, but will likely need some modification to adapt to the exact needs of the user's data.

Scripts which draw plots still follow the overall script structure as described here [Link Needed]. In general, the action portion of the script can be divided into a fewsections:

Example Plot # 1 - Linewidths in a Grating

Consider the grating measured in this image.  For a simple plot, let's just draw the linewidth for each line in this grating. 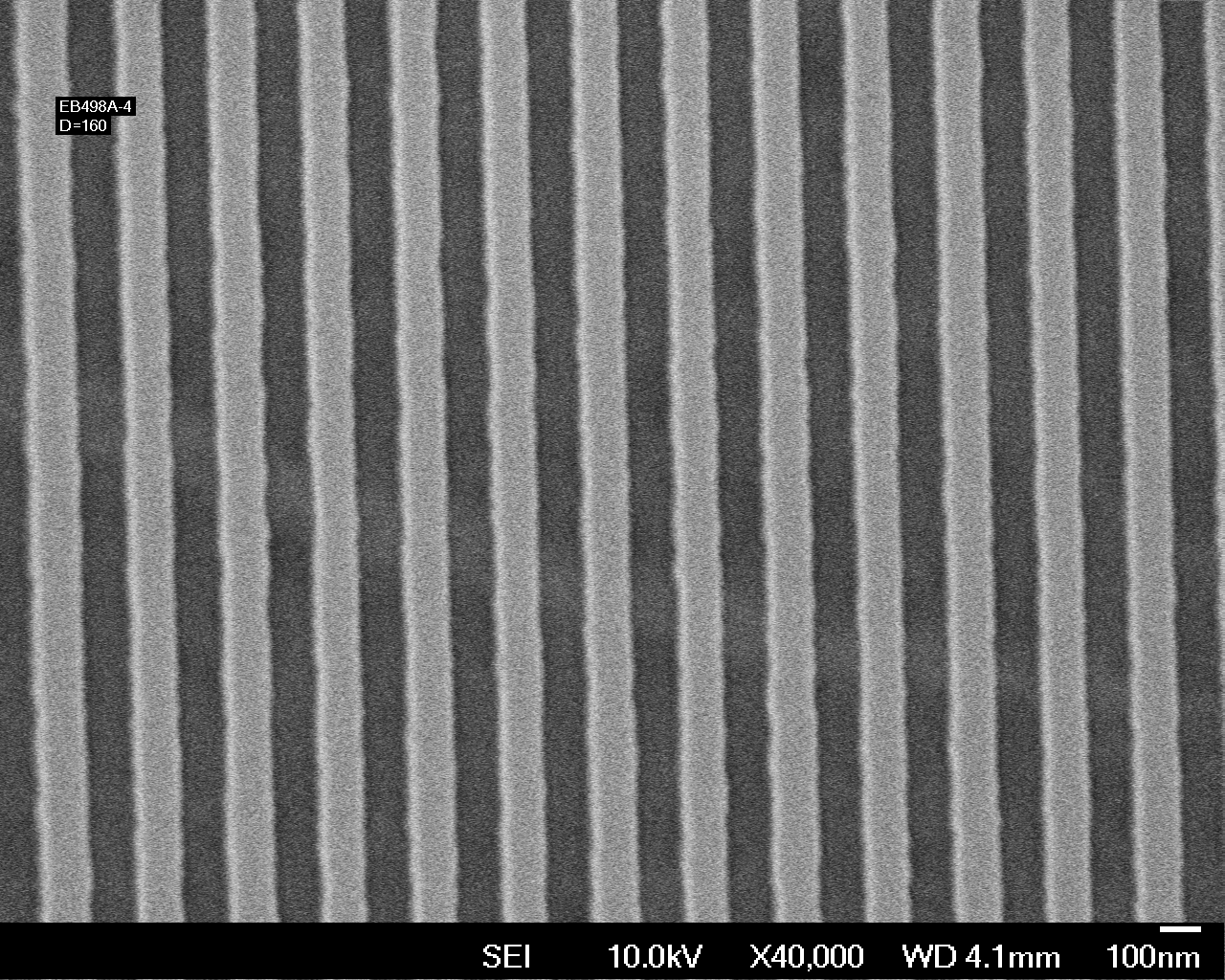 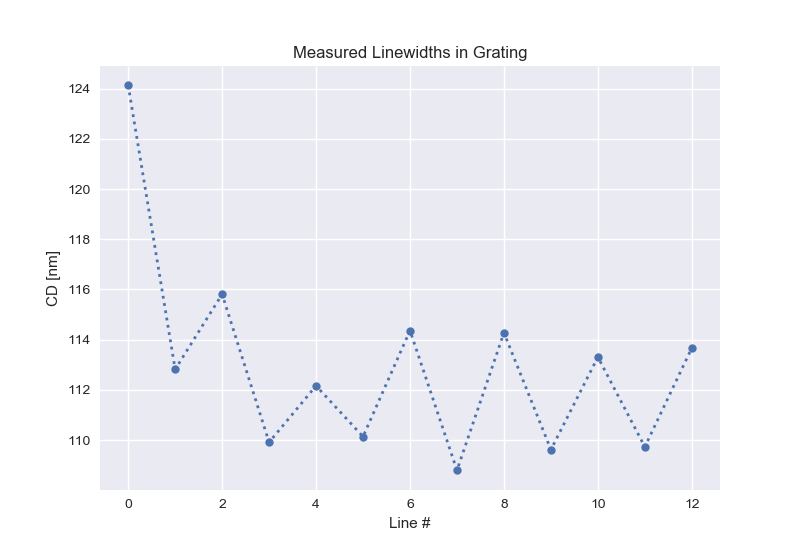 The script code to draw this plot is shown below.  This is starting simple: this is a very basic script with no checking on the data or handling of errors. For example, there is no handling for cases such as if there are no lines in the project, and if there are multiple images, all data will be plotted on the same axis in serial order.  But it's a simple start.

Example Plot # 2 - Linewidths in a Grating Plot With More Features

The same image, but now the linewidth is measured at 5 different Y locations within the same image, maybe to see if there the CD depends on Y-position in the image.  The plot has more optional features, just to demonstrate how some common plot additions might be accomplished. 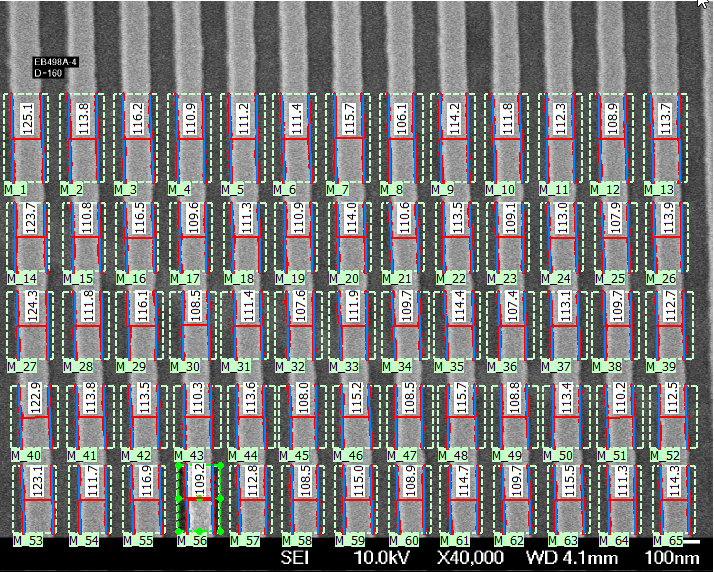 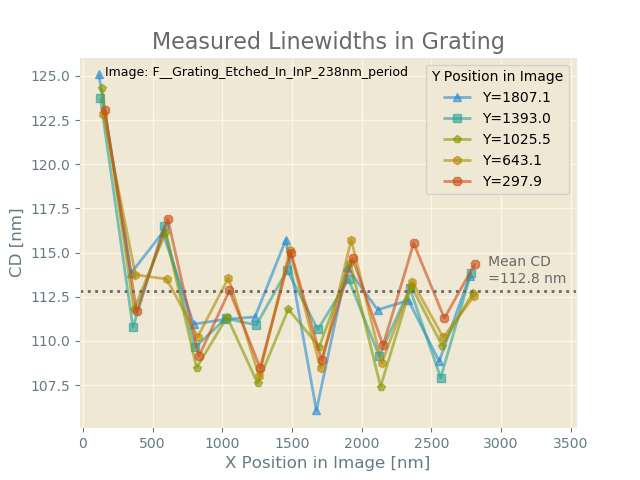 The script code to draw this plot is shown below.  The significant changes in this plot from the first example include:

For this example, consider a set of images similar to the one shown here, each containing an array of circular dots fitted by ellipses in ProSEM. The plot here is a boxplot showing the measured values for the major diameter of each ellipse, with individual values shown by small dots in the boxes.  Boxplots are quite useful for plotting measurement data such as this, since useful information such as mean, spread of data, as well as number and character of outlier measurements are all shown in a single plot. 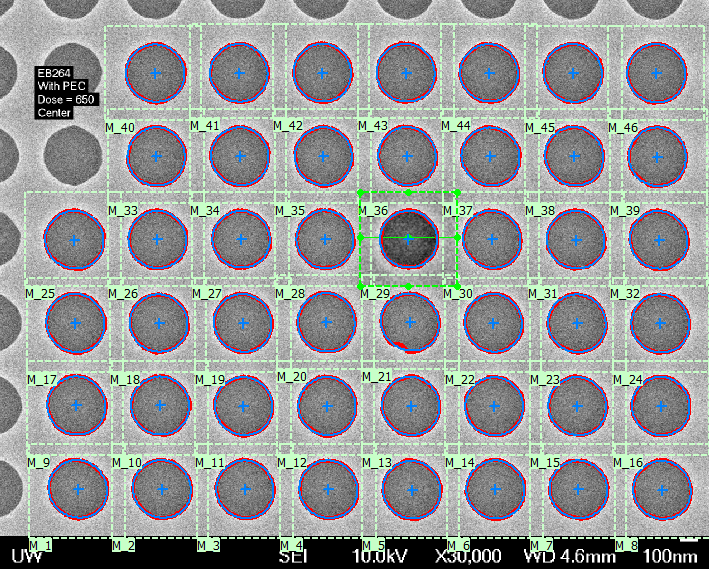 A significant difference in this plot is the method in which the data is accessed.  As described on this page, [LINK NEEDED], for larger volumes of data, reading the individual data items from Python is slow, whereas reading all of the data in a single command, and then parsing the data entirely within Python is much faster.  That method is used here.

The BoxPlot takes the data as a list of lists, one higher-level list of each box to plot, with each list therein containing all of the data points for that box.

MATPLOTLIB has many optional settings for Boxplots, but here the plot is just a basic boxplot, except for the addition of dots added for each data point.

MATPLOTLIB does not directly contain a method to draw dots for each data point, but that is easily achieved by just three lines of code to plot a 'dot' symbol at the location of each data point, in each box, with some small random variation in x coordinate to make viewing the distinct points easier.